Here is Rydell High's senior class of 1959: duck-tailed, hot-rodding "T-Birds" and their gum-snapping, hip-shaking "Pink Ladies" in bobby sox and pedal pushers, evoking the look and sound of the 1950s in this rollicking musical. Head "greaser" Danny and new "good" girl Sandy try to relive the high romance of their Summer Nights as the rest of the gang sings and dances their way through such songs as Greased Lightnin', We Go Together and You're The One That I Want. Recalling the music of Buddy Holly, Little Richard and Elvis Presley that became the soundtrack of a generation. After an 8-year run on Broadway, the ever famous motion picture with John Travolta and Olivia Newton-John and the more recent "Grease Live!" place this story among one of the world's most popular musicals.

Sam Barlow High School's national award winning theatre program presents seven high energy performances, including a "Grease Sing-A-Long" performance on November 17th, with lyrics projected so audiences can sing along with their favorite tunes from the show. Be there, or be square! 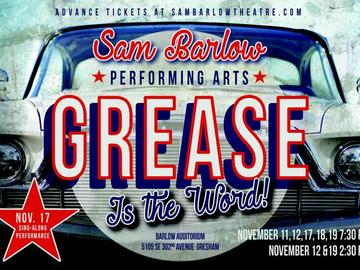